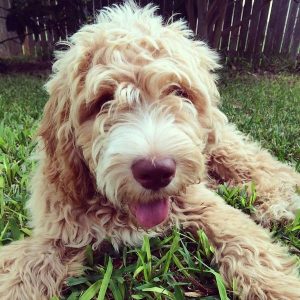 The Clumberdoodle is a beautiful, cuddly creature with lots of wavy, soft hair and a good, sweet personality. These dogs are easy to train and good with families. Clumberdoodles will require grooming to keep their dense wavy hair from matting. They love to play outside, but do well inside too. Very lovable pet with peppy, yet relaxed demeanor.

The Clumber Spaniel’s history is one with many holes. There is very little documentation regarding the origin of the breed, however, it is believed that several breeds including the Basset Hound, Alpine Spaniel and St. Bernard, were involved. It is also believed that the Clumber Spaniel originated in France and was moved to England for safe keeping during the French Revolution by one of the dukes of Noailles. The duke turned over his precious cargo to the Duke of Newcastle at Clumber Park in Nottinghamshire, giving the breed their name.

The Clumber Spaniel became a fast favorite of English royalty. Historical figures such as King Edward VII, his son King George V and Prince Albert(Queen Victoria’s consort), are all said to have owned a Clumber Spaniel. The Clumber Spaniel is the largest of all the spaniel breeds. They were utilized for their specialty in hunting in dense cover and would often be found hunting partridge as well as pheasant. They can also be trained to retrieve.

The Clumber Spaniel found itself in Canada in 1848 and soon made its way south to the United States. The Clumber Spaniel was recognized by the American Kennel Club in 1884 and was prestigiously one of the first 9 breeds to be accepted to the registry.

The Clumber Spaniel has what is known as a “trophy mentality”, requiring them to carry something in their mouths quite often. Due to this, it is imperative that objects potentially harmful to the dog be kept out of reach. It is recommended to keep plenty of puppy friendly toys on hand. For those out there looking for the perfect quiet companion, the Clumber Spaniel is not prone to barking.

The Clumber Spaniel is quite playful and friendly with the family and is known to do well with children. They are also known to be quite easy going with other non-canine pets.

When you mix the Clumber Spaniel with poodle, and all great qualities are enhanced. My Clumberdoodles are very friendly with everyone.

The Clumber Spaniel breed needs a gentle hand. They do not respond well to heavy-handed discipline. They will not respond to it. Clumber Spaniel’s are easily trained as they have a good memory and like to do things to please their owner.